When the original version of PhpGedView (PGV) was released in 2001 internet browsers were relatively basic compared to today’s standards. So it was common to use pop-up overlay screens for functions such as edit windows. PGV’s were commonly about 500 px wide by 600 px tall and positioned somewhere near the centre of the browser screen. They were, in most browsers, the only way to have both your original data and the edit window open at the same time easily. However their small size meant many compromises to the content display, and as laptop computers and more recently tablets and smart phones became popular they occupied more of the available screen.

The design stayed relatively untouched through the 2010 move to webtrees (and is still used there today), and on to kiwitrees – until now! In the latest release of kiwitrees (v.3.2.0, 1st March 2016) the pop-ups have been replaced, making full use of the now universal “tabbed” browsers. Now, when you click “edit” on any record, fact, or event you will open a new tab in your browser. It still contains the same data entry fields as before, but by having more available space it is easier to read, requires less scrolling and can, at least on most desktop computers, display all available options at once (no scrolling down to find things you didn’t know existed). On smaller devices it will automatically adjust to make best use of the available width, pushing some elements down lower. But still keeping texts and entry fields large enough to see and access easily.

If, as part of the edit, you need to add something (new source, media object, or shared note) clicking on those features will open a third new tab, similarly designed for ease of use.

NOTE: On each tab, clicking close will usually close that tab, return you to the previous one and refresh it with the data just saved. I stress the word “usually” because that part of the process is outside the control of kiwitrees itself. The precise action any browser takes on closing a tab does depend on the browser and sometimes settings you can adjust within it. Browsers have different ways to open and close tabs. Some open new tabs to the right of the current one; some(rarely) to the right of all open tabs; and some to the left. Most browsers on tab close will revert to the one to it’s immediate left. That might not be the last one you were using. You’ll need to experiment to understand your own browser’s way of working. But after much testing I’m confident that on closing a tab the majority of commonly used browsers will revert to to the previously used tab, which will be the one immediately to the left of the one closed.

Regardless of the browser, using tabs the majority make it possible to:

As described, and shown in the image above this post, the better use of available space is one of the greatest benefits. This is particularly the case in the most complex of the old pop-ups – the Census Assistant window. Here you can see the old and new for comparison: 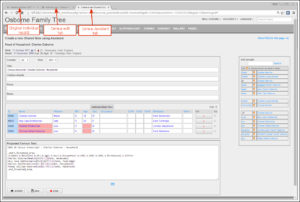