Progress in the last few days has been mainly focused on the layout of charts, starting with the ancestry chart (and it’s various options). Hopefully, decisions made for this can be easily copied to most of the other charts.

But first, a big THANK YOU for the responses to last weeks post. In particular to Paul, who provided the inspiration for my preferred solution to the new theme names. A really obvious idea in hindsight. I wish I had thought of it myself. The new themes will have names from the language of my home, Māori, plus where possible they will relate to Māori names for native “trees”, or at least to plant species.

In the boxes to the right are descriptions of the first two theme names, and a sound clip to help with correct pronunciation. The first theme will be “Kahikātoa“, reflecting the red and brown shades. The image at the top of this page is a stand of Kahikātoa on my own property. The next (not started yet) will be based on blue and white and called “Kopakopa“. Here is an example of this rare species in its natural state. 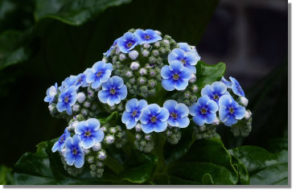 No decisions made yet on any further themes, but I’m confident I will find suitable names for at least one and perhaps two more.

For clarity, I am talking about the item from the main menu, Charts > Ancestry, although most of the decisions will be the same for the similar Charts > Descendants page.

Quite a few decisions to be made for this one, and potentially all other similar charts. To start with here is a comparison between the current version (in the “kiwitrees theme” and the proposed layout for kiwitrees-nova. As before, I’m keen to get feedback on the decisions I am considering.

Probably the first thing to notice ion the comparison. I would like to get rid of those where it is feasible to do so. This chart seems, to me at least, to work fine without them, and looks far cleaner than the old version as a result. This probably won’t work everywhere though. I doubt that a pedigree chart, or the simple 3-generation chart on the families page, or the relationship chart, for instance, would look “right” without some form of lines connecting the boxes. But positioning the boxes, surrounding pieces of text AND drawing lines makes for extremely messy code and often just doesn’t work. So where I can avoid that I would like to.  Others that I think might work without lines would be the descendants (very similar layout to ancestry), hourglass, and compact charts.

A very controversial issue this one. I spent months at webtrees trying to get this changed. I was only “allowed” the small change to a purely optional “compact” display in a few cases. So at present we have compact boxes, “full” boxes (with variable content/tags according to site preferences), expanded boxes (compact boxes expanded to look like full ones), popup extensions to the chart boxes containing more tags, and a second popup box of links to various other pages and people. It again makes for extremely messy and hard to maintain code. It also means lots of complaints about someone’s details not quite fitting the space available because any box will always be a compromise.

In kiwitrees, many versions back I took a small step in the direction I now want to complete. On the “families” page we have small vertical boxes that contain just the basic information, with a hover popup containing more details and links to other pages and people. I would like to use something like that everywhere. But I also want to improve on that first step. In the new version shown in the image above you will see that each box has a single “magnifying glass with a “+” ” icon at top-right. Clicking on that will produce the following additional information, basically all the major facts for that individual. 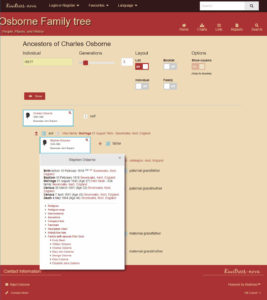 The plan is to use this format in all charts, except (probably) the “interactive chart”.

Displaying charts on small devices is a major challenge, as are the large tabular lists we use in kiwitrees. Both require considerable compromise to be at all usable on small screens. In a few cases, the only option will be to hide them completely from such devices.

For the ancestry and descendants charts (“list” view) the plan is to simplify the display by removing the indentation of boxes, and “stacking” everything in a simple vertical format. The chart is still readable and navigable. Popups are no longer available, so additional information about an individual will require clicking on the name and going to the individual page. The medium size devices still work OK, with just the outer (left/right) borders of the page removed. Here are the relevant part of a phone and tablet display: 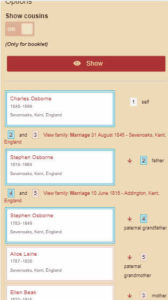 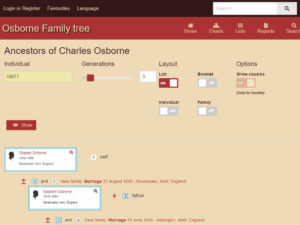 The other ancestry chart options

The ancestry (and descendants) chart has four options: list (discussed in detail above), booklet, individuals, and families. The last two are basically the standard lists of individuals or families used throughout kiwitrees, but only showing the ancestors of a specific person. In that regard, they are very similar to the reports of similar names that are available. However, I have no plans to remove any of these, as they use a common code and are therefore little trouble. Here is a draft of the “individuals” version of the ancestry chart: 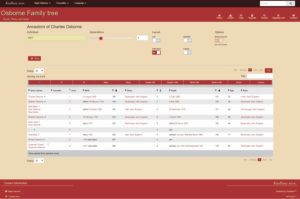 The format for medium devices will be similar. Small devices will probably be limited to (probably) only the list of name, and a reduced set of filter buttons (perhaps the gender options only?).

The “Booklet” option and it’s associated “Show cousins” option I have not yet looked at. But it is based on an hourglass format, so will probably have a similar layout to the “list” option (no joining lines; simple boxes with popup).

Looking forward to your comments!