Kiwitrees-nova, the next major version of the kiwitrees software, designed for all device sizes. It was pointed out to me recently that I have not added any blog posts for ages. So I thought I should use this medium to tell everyone about progress on “kiwitrees-nova”.

To start I should explain what “kiwitrees-nova” is.

Simply, it is the next major version of my kiwitrees software. The current version 3.3 will be the last major version I will release in the current format. There will be more minor versions such 3.3.2, 3.3.3 and on as I will continue to maintain it, keep it up to date for security issues etc. for as long as users need to keep using it. But I am hoping that might be less than two years. 😉

Kiwitrees-nova is primarily a rewrite of all the display code. The underlying processing and storage code is pretty stable now so I will be leaving that alone as much as possible.
[row]
[half_layout class=””]

More people are now using phones and tablets to view their kiwitrees pages. I have tried adapting the existing code to accommodate this, but the reality is that the code is just too old and never designed for it.

Kiwitrees-nova uses the excellent “Foundation 6” framework to replace all the old display code. It is designed from “responsive first” principles. It provides all the structure necessary to ensure kiwitrees looks great on any viewing platform. It also makes it easy to selectively hide features that are just not practical for the smallest screens, without losing any of the key functionality.

The principal component of “responsive web design” is to have a clear definition of the devices and their screen sizes that are being targetted. It is not practical to have a different display for every device or size, so they are usually grouped into three categories: small, medium, and large devices. For kiwitrees-nova I have settled on the definitions for each group shown in the information block to the right of this page. As this blog progresses you may want to refer back to that to be sure you know what is meant by each category.

up to 768 px wide (mobile phones, tablets in portrait mode)

In rewriting much of the old code I will be reviewing what needs to be improved, what can be improved, and what should remain as untouched as possible.  None of the legacy code is likely to be completely untouched but at the same time, I have no interest in removing or degrading the existing functionality.  I am also very conscious that I am doing most of this in isolation, and my opinion is not the only one that matters. Your feedback through this process will be vital. There will also be decisions made about things that can be excluded from small device screens and different ways to do some things. So I will attempt to keep this blog updated as I progress, and will be pleased to debate any of the changes and decisions as they come up. No “decision” will be so permanent that it can’t be reversed!

Apart from the requirements described above, the current version of kiwitrees is very stable and achieves most of its original goals. So here are some of the things that will NOT be changing unless something external to kiwitrees forces a rethink:

I hope to provide a demonstration site for kiwitrees-nova soon, but for now, will attach a couple of screenshots of some of the pages I have made progress on. No particular logic to the ones shown first. Fairly naturally I started with the home page, but then I have taken a slightly more random approach. Probably not ideal. but I do need to ensure my motivation gets enough interest to keep going. There is a LOT to do!

The major change to the home page is actually an invisible one. I have created a “template” for the block layout, stored as part of each theme folder. This allows different themes to have different layouts. One might be like current kiwitrees (large blocks at the top, small ones below), another more traditional (large blocks to the left, small to the right), and another as shown here in reverse (small to the left, large to the right). Even a mixed layout would be possible.

In terms of themes, I prefer not to exactly transfer any of the existing ones over to kiwitrees-nova. I still hope to include at least three in the first release, and they can have some similar general colour styles to the old, but beyond that let’s have some fresh new looks. For now, to make life easier, I am only working with one theme. But the framework being used (including “SASS” for the technically interested) makes it pretty easy to adapt for different looks later. As you can see this first theme is very different. I don’t even have a name for it yet. Any ideas? 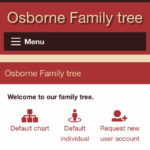 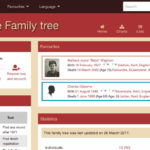 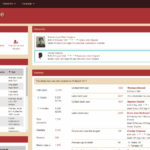 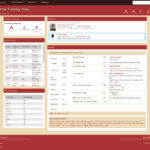 [clear]Note that the small screen loses things like the kiwitrees-nova logo to save space. The medium size loses the space left and right of the block area that the large screen has. Like most such decisions these are all choices that can be changed in other themes. 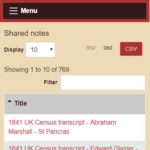 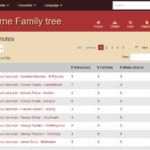 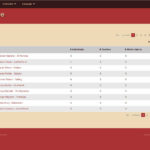 [clear]In this case the small view is restricted to a single column, as anything more would render the font so small it is unreadable.