Note that we also have translations into the regional variants of English. Hence we have separate translations for “British English” and “American English”.

This FAQ is in two parts. The first is a description of kiwitrees’ unique method of customising standard texts. It happens entirely in the kiwitrees administration pages (Administration > Site administration > Custom translations) and requires no programming skills. The second part describes the language file system carried over from webtrees. For backwards compatibility, and to cater for more complex language strings this remains in place. You can even use both systems if you wish. 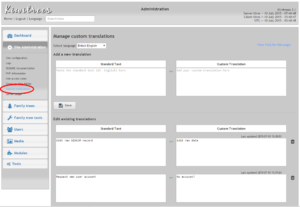 The page will now refresh and display one or two additional sections:

The system of custom translations used by kiwitrees, and transferred over to kiwitrees uses language files to store custom translations. They can be any one of three types, depending on the complexity of the text to be translated and the your own preferences. The file types are csv, php and ‘gettext’ (.mo).

Where to store the local language files

The file names consist of the language code, plus an extension to indicate the format. Examples of language codes are:

Three formats can be used, and these are described below. The translations are always from English to the target language.

Note that translations are always case-sensitive, so that “Hello” is translated differently to “hello”.

The simplest format is CSV. Although CSV stands for “comma separated values”, we actually use semicolons instead of commas, and all text must be surrounded by double quotes. Here is an example of a CSV file for British English, which would be called data/language/en_GB.csv.

This would cause the word “yes” to be replaced with “certainly”, throughout the program. To include a double quote in the text, precede it with a backslash “\”.
The advantages of this format are:

The second format uses a simple PHP script to create an array of translations. As well as the translations, the file contains a simple check, to prevent visitors to your site from accessing the data. Here is an example of a PHP file for American English, which would be called data/language/en_US.php. To include a single quote in the text, precede it with a backslash “\”.

The third format is called gettext. Gettext is an open-source, industry-standard, library for translations. Each language requires two files. There is a PO file, which contains human-readable text. Although you *can* edit these with text editors, it is common to use a dedicated “PO editor”. POEdit is a common tool for this, although it has a number of limitations, and we recommend Better PO Editor, which was written by one of the webtrees developers, Michele Locati. The PO file needs to be converted into a MO file, which is a machine-readable, compressed version of the same file. But you may need to take the binary MO file in the release and convert it back to a PO file in order to edit it with the Better PO Editor. Only POEdit has the msgunfmt executable to do this reverse conversion. So you may need both tools.

Here is an example of a PO file for American English, which converts certain Jewish terms to Ashkenazi spellings. The file would be called en_US.po and you would need to convert it to a .mo file, which would be called data/language/en_US.mo. Note that it includes several context-sensitive translations, where we can have different translations for the same English text.

Files should be saved in UTF8 encoding, rather than ISO-8859, latin etc. You should be especially careful with some text editors, as they often start the file with an invisible character (called a Byte-Order-Mark). If, after installing your file, you get an error of the form “Headers already sent”, you have most likely included a BOM character.