Kiwitrees can display a highlighted image for any individual on their own page and on any chart they appear on. This is turned on by default for any new installation and will be effective as soon as you add a media object to any individual. 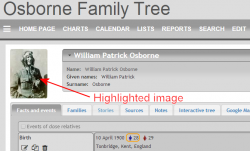 The feature can be turned on / off at Administration > Family trees > your family tree > Media tab by setting “Show highlight images in people boxes” to yes or no.

If you have multiple media objects attached to a single individual it is also possible to control which of them is the “highlighted” image. To achieve this requires an understanding of the process Kiwitrees uses to select which image is to be the highlighted one. This can be as simple or as complex as you choose to make it.

First, here are the rules the programme uses to find the highlighted media object for an individual: 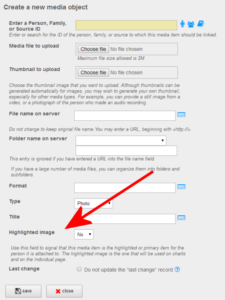 The “Highlight option” referred to here is a setting available whenever you upload/add / or edit a media object. You can either set it to Y (yes), N (no) or leave it blank, which is then used by the rules above. With effect from release version 3.0.0 of Kiwitrees, the default will be “N”. It is also possible to have nothing set for that option if you have uploaded objects prior to version 3.0.0 (when ‘blank’ was the default); or imported your tree from another software created GEDCOM file). “Not set” is, therefore, a valid option in many cases.

The “Level” in the rules above is from the GEDCOM specification and refers to where in the individuals record the media object is linked. If linked directly to the person it is at “Level 1”. But if connected to a fact or event within that individual’s record (like a birth certificate attached to a birth event; or a gravestone image attached to a burial event) it will be “Level 2”.

The advantage of having the Highlight option default to “no” is that you are never likely to find an “odd” image being used as the highlight. PDF documents, audio files, and even certificates are not generally very attractive in the highlighted image position. If all the images are generally set to “no”, then only the one you want becomes highlighted when you choose to set it to “yes”. The disadvantage is that the image will not then be used if a later record is lin ked to it that you do want highlighted.

The “Highlighted” option is only available for the actual image, so there can be complications when one image is linked to more than one individual, but you only want it to be highlighted on one of them. But even this can be achieved by careful use of the rules above. One way to achieve this would be to set the highlight option to “yes”, causing the image to be highlighted on both (rule 3.1), but have a second image attached to the individual you do not want it on also set to “yes”, and that object listed higher in the raw GEDCOM data than the other (rule 3 says the first object with the “Y” will be used). The latter change does require the use of the main menu > Edit > Edit raw GEDCOM data function which is a powerful tool, so use with care.

The final rule (3.3) is one that many people often forget, and can be another solution for the above scenario. It says that no image connected at level 2 (or 3, or 4, etc) will ever be used as the highlight image. So, linking an image to (say) subsidiary to the source of an event will prevent it from ever be used as the “highlighted” image.